The lights! The shows! The casino action! Pick your Las Vegas adventure, and the adrenaline will flow.

It’s amazing to realize that, in 1905, Las Vegas was nothing more than an encampment, a tent city. Today, it is home to a veritable phalanx of billiondollar casinos. In 1906, the Golden Gate Hotel & Casino became the first permanent structure in Las Vegas. It still bears its distinctive “1 Fremont Street” address today. In the 1930s, electricity flowing from the new Hoover Dam fueled the neon explosion. By the sixties, the city laid claim to the five tallest neon signs in the world. 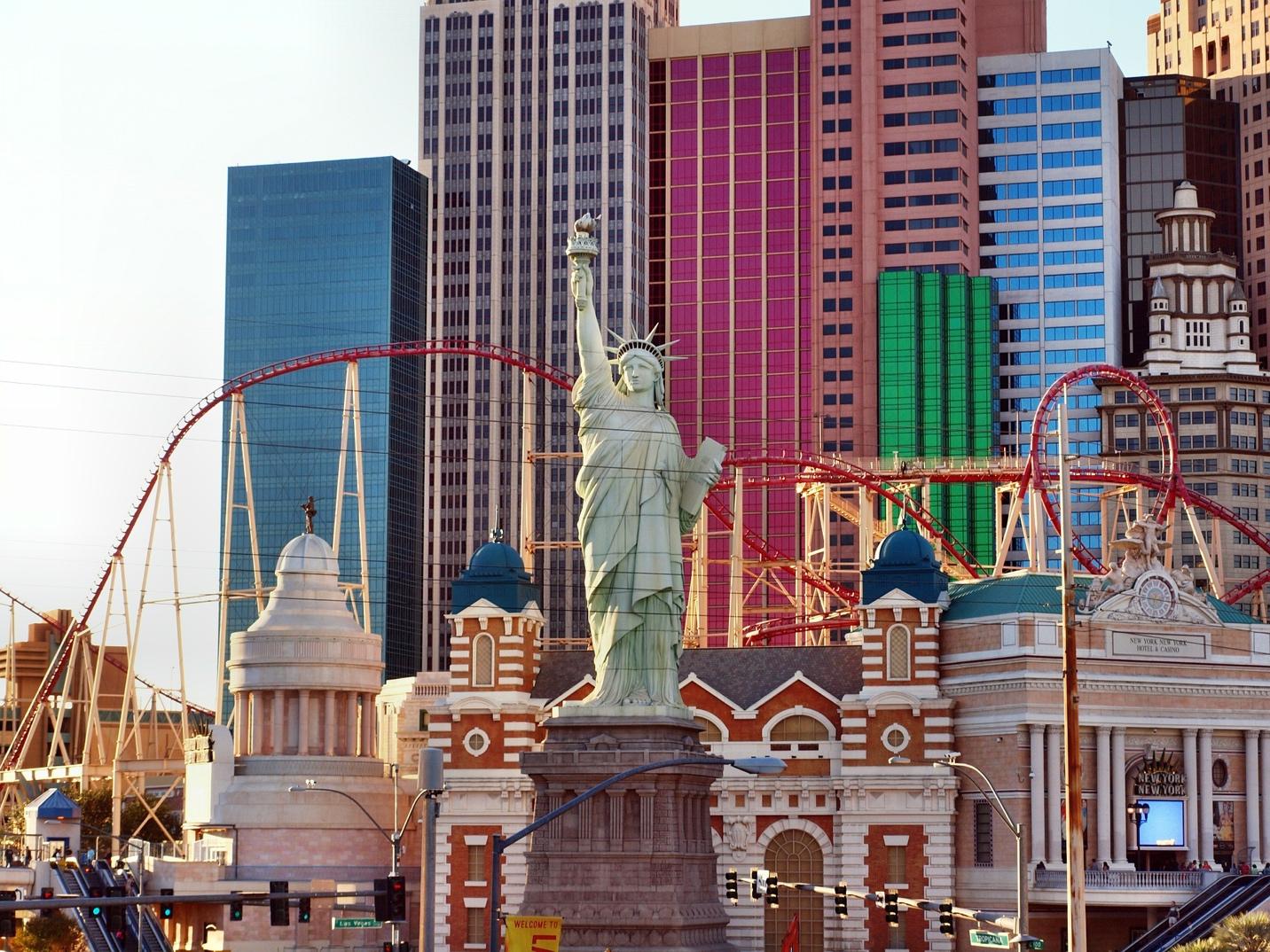 Today’s Las Vegas Strip dates to when the 63-room El Rancho opened in 1941. The Flamingo followed in 1946, and the Desert Inn opened in 1950. Today, many of the historic old Las Vegas Strip casinos have been replaced by some of the best casinos on the planet. Others, like the former Las Vegas Hilton (LVH), have been re-branded. For example, in 2014 LVH became the Westgate Las Vegas Resort & Casino.

In the early days, Las Vegas was mostly for adults. Today, families flock to this desert paradise for theme parks, thrill rides and more.

There’s something for everyone in this Top 10 list. Many of the hotels are along a 4.2-mile stretch of South Las Vegas Boulevard. It is commonly known as the “Las Vegas Strip.”

The 350-foot-tall pyramid at the Luxor is one of the city’s most unforgettable structures. Elevators travel at a 39-degree angle. The Sky Beam atop the pyramid reportedly costs $50/hr to operate. The Luxor is all the more appealing following the redesign of its original interior. HyperX Esports Arena is a 30,000-sqft gamer’s paradise.

Caesars Palace is often rated as one of the top Las Vegas casinos. Caesar’s pays homage to the opulence of ancient Rome. Everything is on a grand scale here. There’s 129,000 sqft of casino space The 4.5-acre Garden of the Gods includes five pools. Browse the 160 boutiques and shops at The Forum. Select from more than 500 items at the new $17 million Bacchanal Buffet.

Guests enjoy Harrah’s convenient location in the middle of the strip. You’ll find recently renovated rooms and value-priced suites. Enjoy a designer cocktail and live music at Carnival Court. Relax in and around the Olympicsize outdoor pool. For unforgettable Vegas views, board the 550-foot-tall High Roller Observation Wheel just south of the hotel.

In March, 2021, the all-new 1500-room Virgin Hotels Las Vegas opened at the site of the former Hard Rock Hotel. Nobu, long a staple at Hard Rock, will remain. The chamber rooms include sliding privacy doors that create areas for both rest and revival. Virgin Hotels has partnered with Mohegan Sun to open a Vegas first, the Mohegan Sun Casino.

A stay at the Golden Gate Hotel & Casino puts you at the site where it all began. Guests enjoy the famous Fremont Street Experience and its Viva Vision light shows. More than a century ago, a brick building arose amid a tent city. In 2021, the historic meets the ultra-modern with the opening of Circa Resort & Casino on the grounds.

Palms Casino Resort features three modern glass-faced towers just west of the Strip. The Palms is known for its fantasy suites. The Hardwood Suite comes with its own basketball court, for example. On the 55th floor of the Ivory Tower, savor a drink at the elegant Ghostbar. Enjoy city views through 14-foot floor-to-ceiling windows or step out on the SkyDeck.

By room capacity, the 6852-room MGM Grand is the second largest hotel in the world. Consider the Stay Well rooms in the Grand Tower. Water enthusiasts have four giant pools and a lazy river to choose from. Oh, and that 50-ton statue of the lion? It’s the largest bronze statue in the country!

The Mirage delivers AAA Four-Diamond luxury in a tropical paradise. Relax poolside in an outdoor oasis bedazzled with lagoons and waterfalls. The Secret Garden & Dolphin Habitat hosts white tigers, white lions and bottlenose dolphins. Watch the iconic volcano deliver explosions that are taller and more fiery than ever.

The Bellagio often vies for the title of “Best Casino in Las Vegas.” It is certainly one of the most luxurious hotels on the Strip. The Bellagio’s fountains feature more than a thousand nozzles shooting water up to 460 feet in the air. A five-mile maze of pipes delivers the water essential for the show.

Here are other casino hotels worthy of your consideration as well.

Get ready for a medieval-themed adventure at the Excalibur. The Tournament of Kings is a dinner show with appearances by King Arthur and Merlin the Wizard. One of the four pools has a waterslide. Another is for adults only. For the kids, there’s the Fun Dungeon arcade.

Four Queens, like some of the other off-strip casinos, has a reputation for loose slots with better than average payouts. Guests look forward to the Viva Vision light shows. Four Queens is at the landing point for the hair-raising Slotzilla zipline. Fly seated or “super-hero” style.

The distinctive Main Street Station is just west of North Las Vegas Boulevard. It is decorated with antiques gathered from around the world. Dine at the award-winning buffet. The microbrewery here is also an award-winner.

Guest Reservations delivers great deals at the most popular Las Vegas casino hotels. Here’s a list of all hotels in Las Vegas. Guest Reservations is an independent travel network offering more than 100,000 hotels around the world.