Property Location
With a stay at The Lex NYC in New York (Flatiron District), you'll be minutes from Flatiron Building and close to Empire State Building. This hotel is close to Macy's and New York Public Library.

Rooms
Make yourself at home in one of the 48 air-conditioned rooms featuring flat-screen televisions. Complimentary wireless Internet access keeps you connected, and cable programming is available for your entertainment. Private bathrooms with shower/tub combinations feature complimentary toiletries and hair dryers. Conveniences include safes and complimentary newspapers, as well as phones with free local calls.

Amenities
Make use of convenient amenities, which include complimentary wireless Internet access and concierge services. 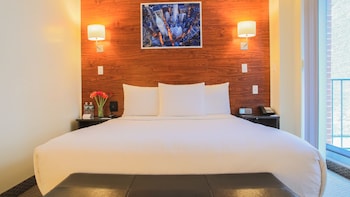