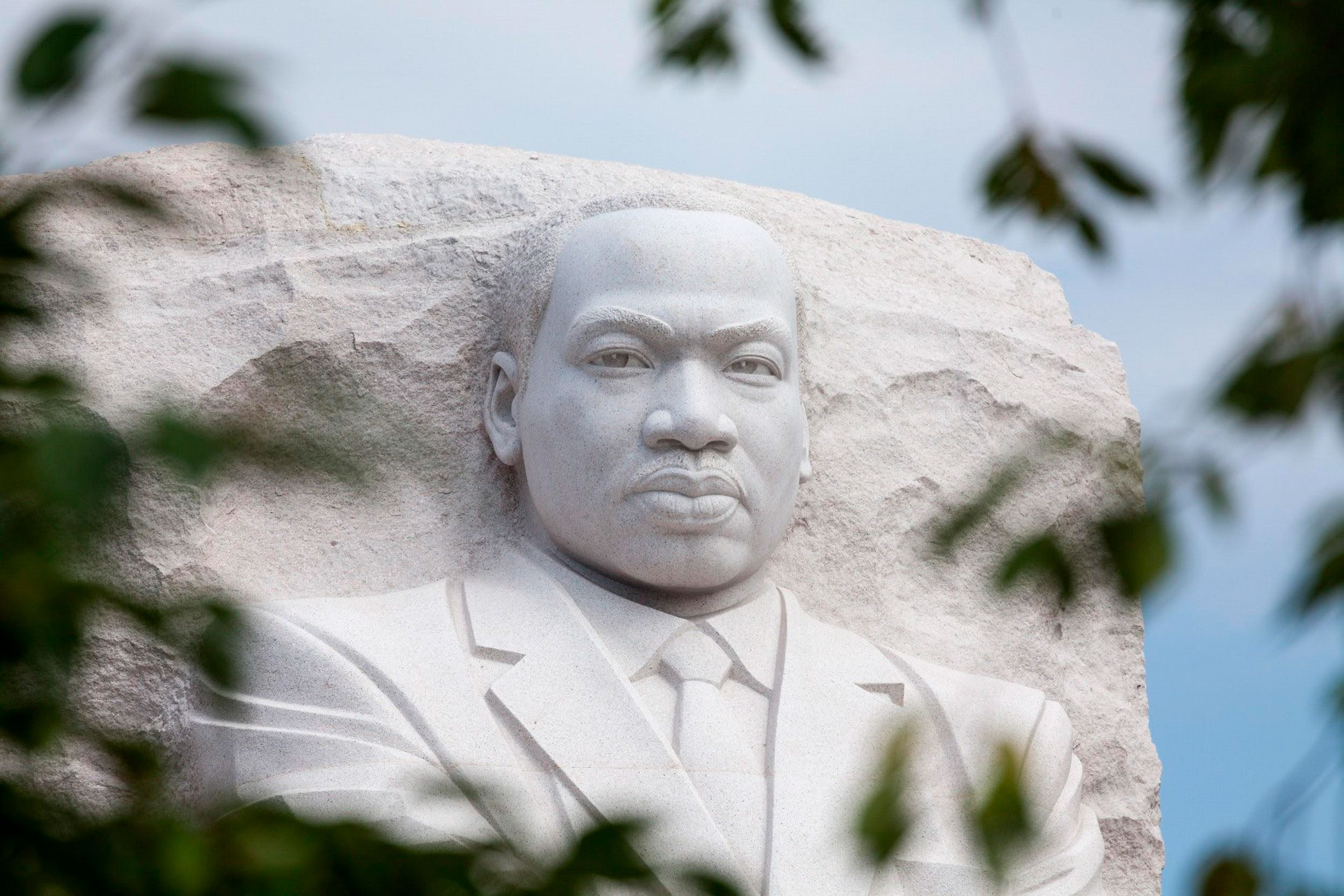 Annually, on the third Monday of January we celebrate the memory of Dr. Martin Luther King, Jr. Although the holiday provides children with a day off from school and an extended weekend, it is important to recognize the reason for the day. We celebrate the life and impact of Dr. Martin Luther King, Jr. MLK Day doesn’t just represent one man, but the civil rights he fought for. For those planning a getaway for the three-day weekend, the following cities offer plenty of activities to enjoy with the family to learn more about Dr. King’s legacy and honor the American Civil Rights Movement. 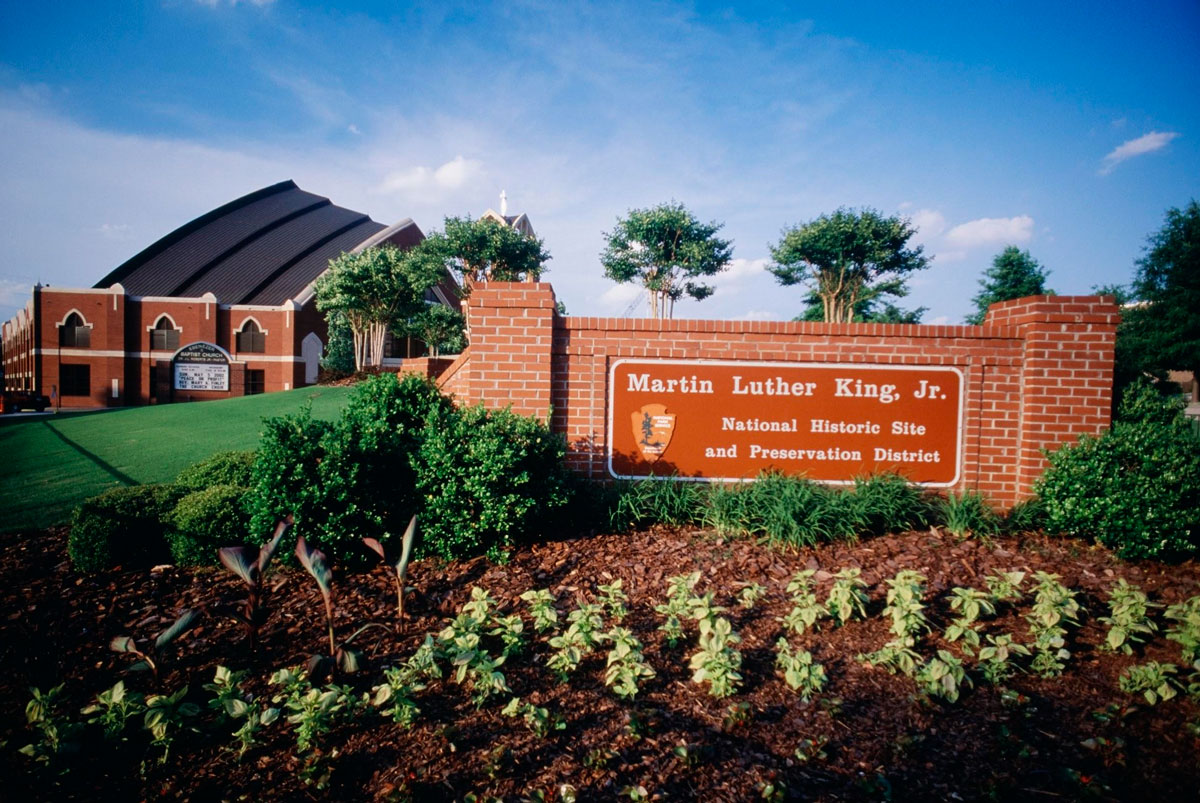 On January 15, 1929, Dr. Martin Luther King, Jr. was born in Atlanta, Georgia. Dr. King attended Booker T. Washington High School and Morehouse College. The city of Atlanta has fully embraced the memory of the Civil Rights icon and the history behind his cause. He is entombed beside his wife, Coretta, at the King Center for Nonviolent Social Change. Around the corner is Ebenezer Baptist Church, where Dr. King was baptized and began preaching. Out-of-town visitors can stay nearby at the American Hotel, the first local hotel to welcome African Americans. Other must-sees include the Martin Luther King, Jr. National Historic Park and Big Bethel AME. 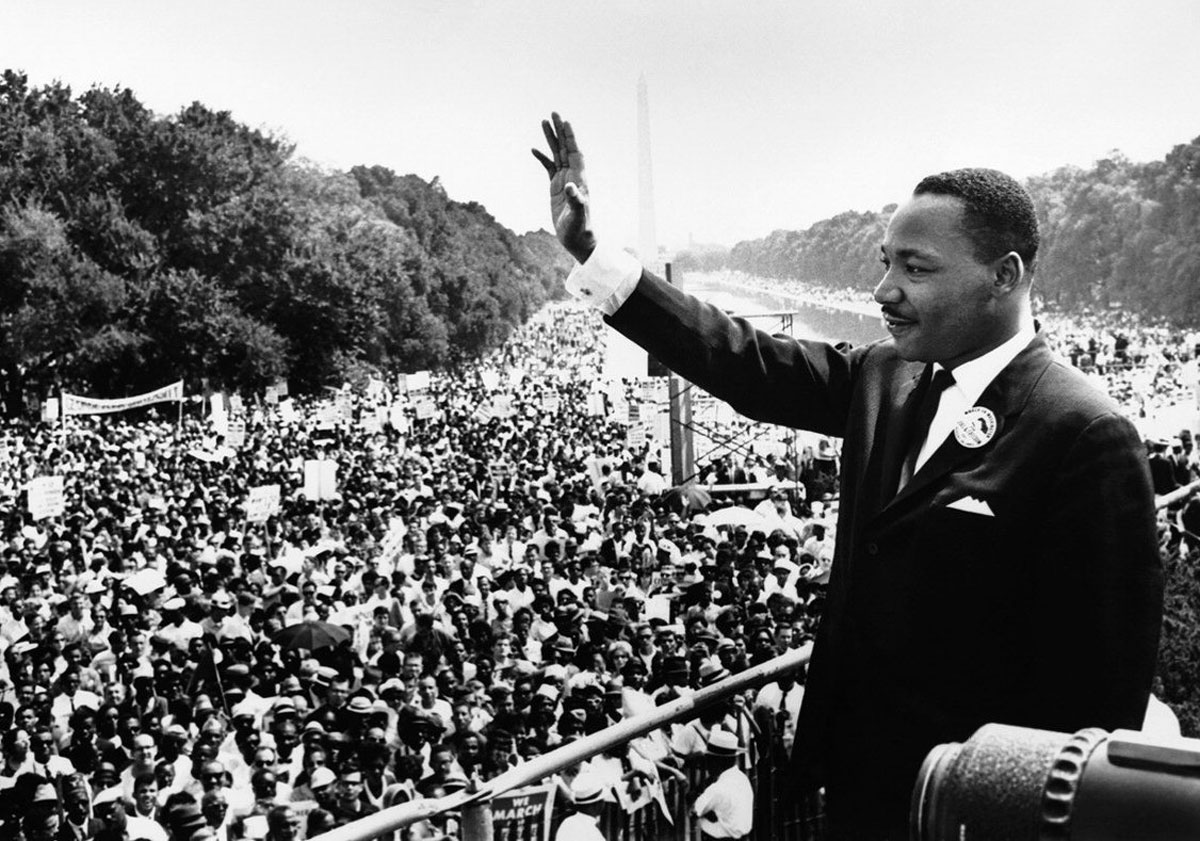 In 1963 Dr. King addressed over 250,000 people on the steps of the Lincoln Memorial in what would become known as the “I Have a Dream” speech.

Located on the opposite end of the National Mall is one of the most popular museums in D.C., the National Museum of African-American History and Culture. Other noteworthy locations to see include Frederick Douglas’ home in Anacostia and the Martin Luther King, Jr. Memorial. 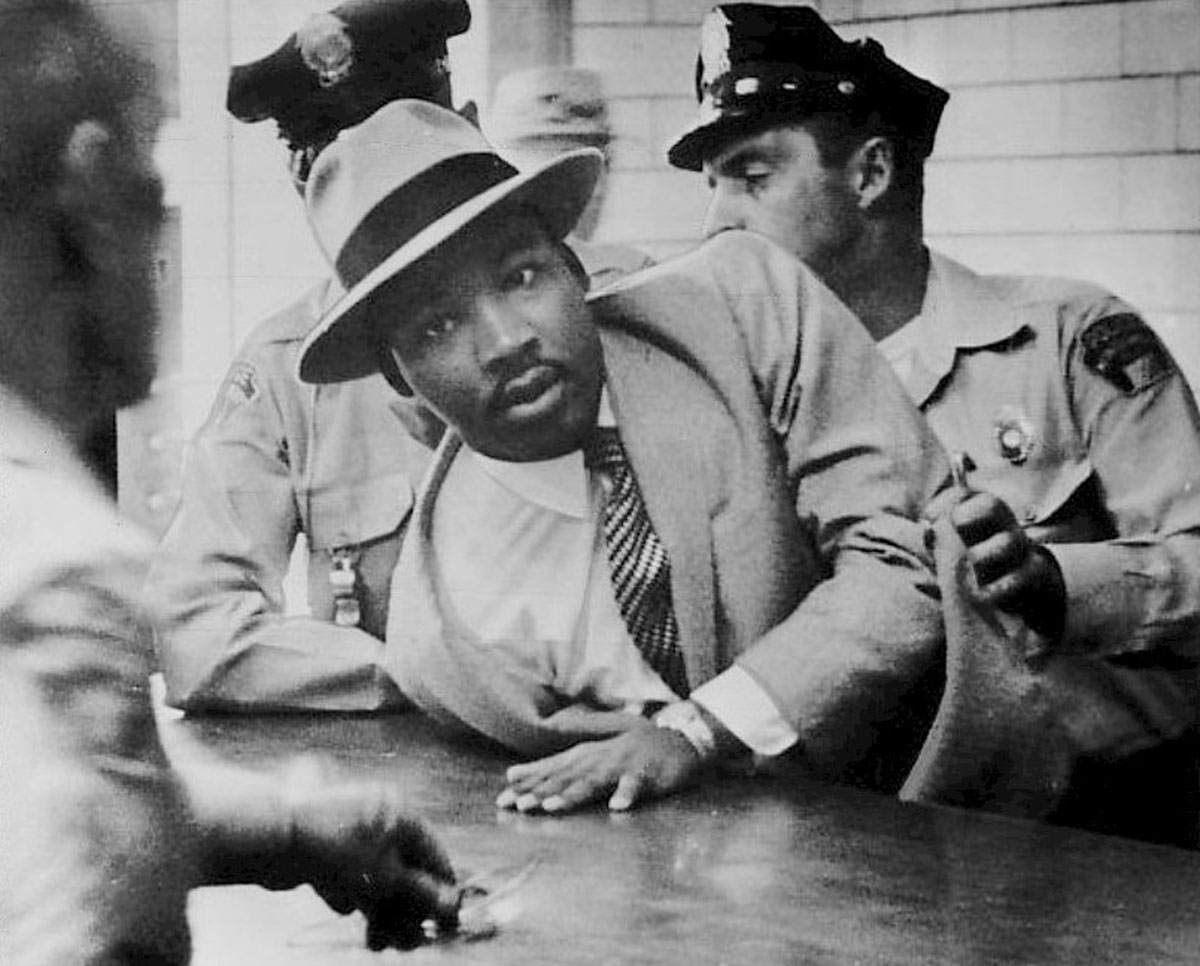 King, known for his pacifist activism, was arrested for the thirteenth time in 1963 during the Birmingham Sit-In Campaign.

Birmingham, Montgomery and Selma are rich with iconic moments in American Civil Rights history. In 1963, Dr. King was arrested for the thirteenth time during the Birmingham Campaign, a protest that garnered the attention of the entire nation after national broadcasts of police using high-pressure fire hoses and police dogs to attack African-American protestors, some of which were children. The campaign marked a turning point in the Civil Rights Movement, and gained attention and support from leaders across the nation, including President John F. Kennedy. The Birmingham Civil Rights Institute commemorates the impact of the campaign.

Montgomery is also home to one of the most iconic protests during the Civil Rights Movement, the Montgomery Bus Boycott. On December 1, 1955, an African-American woman by the name of Rosa Parks was told to give up her seat in the back of a bus to make room for a white male rider. When she refused to comply, Parks was arrested and fined. The arrest sparked the Montgomery Bus Boycott five days later, led by a young Dr. Martin Luther King, Jr. in one of his first organized protests. A mass boycott was organized to encourage African-American riders, who made up over 75 percent of Montgomery bus riders, not to ride the Montgomery buses. The boycotts were met with resistance from the municipality, but after local African-American leadership made alternative transportation available via carpools and discounted taxi rides for African Americans, the city had no choice but to accept the demands of the Montgomery Improvement Association. Montgomery’s federal court ruled in June of 1956 that any forced segregated seating was a violation of the 14th Amendment. Today, the city remembers the events of 1955 with the Rosa Parks Museum and Freedom Rides Museum. 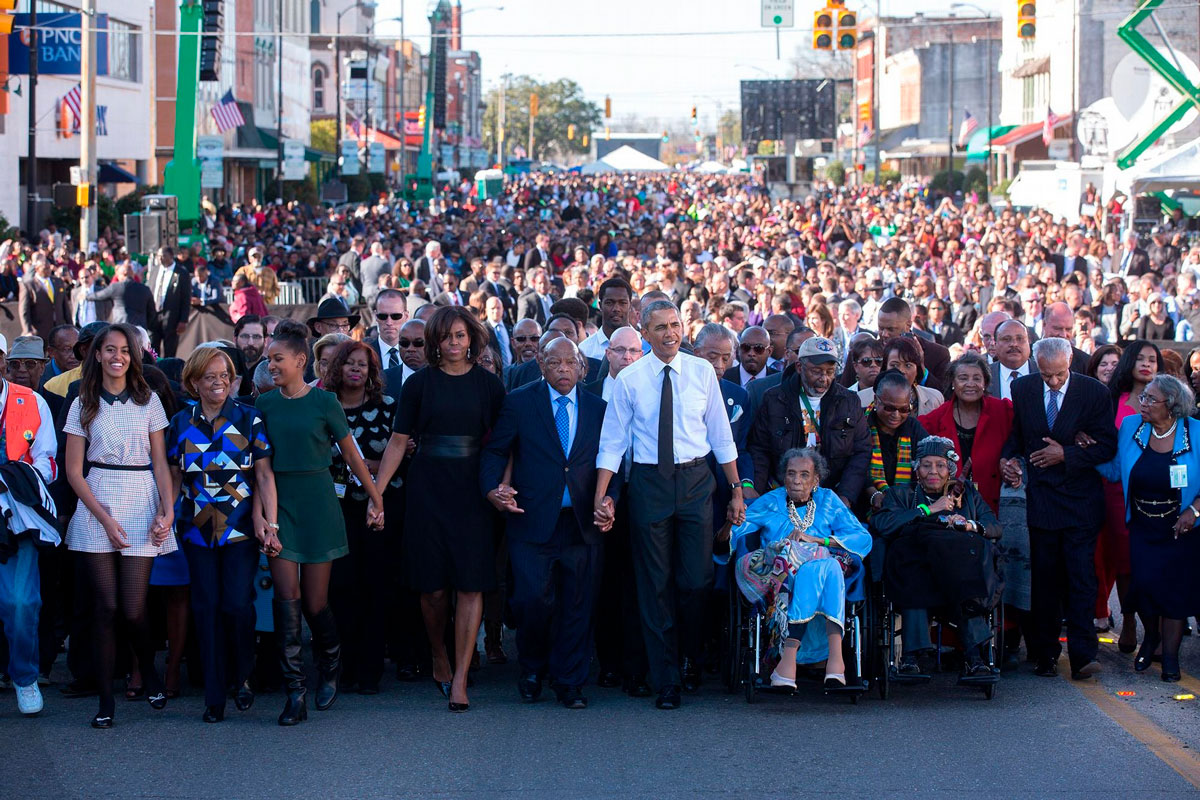 On March 7, 1964, a protesters' march from Selma to Montgomery was met with an assault from local police using billy clubs and tear gas, in what would become known as “Bloody Sunday.” The march was organized to protest for African Americans’ right to vote, which had been compromised by literacy tests and local intimidation. After the initial march was thwarted by local police, follow-up marches were organized by Dr. Martin Luther King, Jr. with support from President Lyndon Johnson. After Alabama Governor George Wallace refused to provide protection for the protestors, President Johnson sent nearly 2,000 members of the Alabama National Guard, FBI agents and federal marshals to protect the 25,000 marchers on their way from Selma to Montgomery. The march became a foundation for Johnson’s Voting Rights Act, which was passed later that year. Selma is host to the iconic Edmund Pettus Bridge where the original altercation between marchers and police took place, as well as the National Voting Rights Museum and the Slavery and Civil War Museum.

While it’s tempting to take advantage of the extended weekend MLK Day often provides, it is essential to remind ourselves why we celebrate that day and its significance to millions of people across the country and world. These destinations offer sites that honor the life and legacy of Dr. Martin Luther King, Jr. as well as the importance of the American Civil Rights movement. Be sure to plan ahead and book your hotel with Guest ReservationsTM.