Property Location
Petit Palace Triball is in the heart of Madrid, walking distance from Plaza del Carmen and Plaza de Callao. This hotel is within close proximity of Circulo de Bellas Artes and Plaza Mayor.

Rooms
Make yourself at home in one of the 61 air-conditioned rooms featuring iPads and plasma televisions. Complimentary wired and wireless Internet access keeps you connected, and digital programming provides entertainment. Private bathrooms with showers feature complimentary toiletries and hair dryers. Conveniences include phones, as well as laptop-compatible safes and desks.

Amenities
Take advantage of recreation opportunities such as bicycles to rent, or other amenities including complimentary wireless Internet access and concierge services. Additional amenities at this hotel include babysitting/childcare (surcharge) and a television in a common area.

Dining
Take advantage of the hotel's room service (during limited hours). Buffet breakfasts are available for a fee. 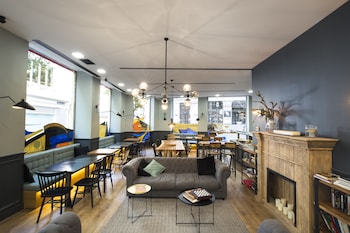